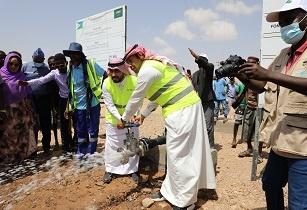 Two new development projects in the water and housing sector were inaugurated during an official visit to the country from Sultan bin Abdulrahman Al-Marshad, CEO of SFD, who also laid the foundation stone for an upgrade of the Djibouti-Galafi arterial road, alongside Abdoulkader Kamil Mohamed, the Prime Minister of Djibouti.

45,000 people in the coastal Province of Obock are set to receive clean drinking water from the new water project which will involve the construction of 105 km of water pipes and eight water tanks to pump clean water from the Bissidiro region.

Al-Marshad further inaugurated the construction of a 120 housing unit project with HE Amina Abdi Aden, minister of cities, urban planning and housing.

Prime Minister of Djibouti thanked the kingdom of Saudi Arabia and SFD for its commitment to sustainable infrastructure projects in Djibouti and for its continued friendship over the past four decades. He acknowledged that the provided investment made a crucial contribution to economic development and growth and brought important social benefits which led into increased prosperity and stability.