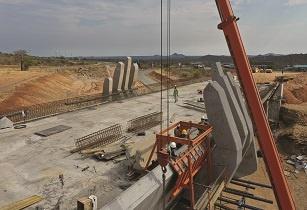 The CHRYSO Plast Omega 174, a new-generation water reducing plasticiser, has been used in the concrete mixes for the new Nancefield bridge, which forms part of SANRAL’s Musina Ring Road Project in Limpopo Province South Africa

The project, which allows the N1 to bypass the 77 m Musina bridge, is due for completion in Q2 2022. SANRAL wanted visitors from Zimbabwe and South Africa travelling on the N1 to experience a feeling of being welcomed and the bridge therefore features a prominent pair of 13 m high ‘hands’ ti express this message. The deck is supported by the columns of the hands and the bridge is aesthetically held on the palms of the hands.

Another challenge was presented by the hot temperatures – up to 45°C – typical of Musina in summer. The concrete temperature needed to be kept under 30°C to prevent thermal cracking. This was achieved by a combination of measures, which included keeping the concrete under shade and cooling it with sprayers. CHRYSO Plast Omega 174 allowed the mix designs to be optimised, giving more open time on the fresh mix concrete.

CHRYSO Plast Omega 174 was the primary product supplied for the Nancefield bridge and was used for the bridge decks, balustrades and the bridge piers with hands. Just over 3 000 cu/m was required for the concrete of the bridge.

According to Ben Myburg, technical consultant at CHRYSO Southern Africa, “CHRYSO Plast Omega 174 is a multi-dose admixture, which allows concrete to exhibit extended workability characteristics. It improves the cohesion and lowers the viscosity of a concrete mix, which results in an improved homogeneity and compaction, allowing for superior off-shutter finishes thereby eliminating the risk of repairs. By reducing the need for extra water, it increases the durability of concrete by reducing permeability.”