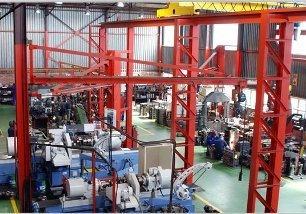 “We are very proud to be first to market with aftermarket parts of this quality,” Metric Automotive Engineering’s Andrew Yorke, says. The company is one of South Africa’s most comprehensively equipped diesel engine and component re-manufacturers. Since being appointed IPD’s distributor in South Africa in 2008, we have been servicing an increasing number of customers who have recognised and experienced the significant cost savings associated with world class quality replacement parts.
“The focus of both Metric Automotive Engineering and IPD has been on helping equipment owners to save money without risk to reliability. Essentially IPD products are Cat replacement parts but, unlike parts being sourced from the East, IPD parts are manufactured in a Lloyds accredited ISO 9001:2000 quality controlled environment.”
According to Yorke, the very real danger with replacement parts is that companies produce “copycat” parts by duplicating the look of the original part. “And this, unfortunately, is where it ends. By contrast, IPD parts are engineered replacement parts and produced under stringent quality control circumstances to ensure integrity and optimum performance. Therefore they not only look like the OEM part, but their performance under working conditions is identical to that of the OEM part.”
Concluding the distributor agreement was a proactive move by Metric Automotive Engineering to add value to customers by effectively becoming a single source supplier in terms of engine component rebuild/remanufacturing service and engine parts supply.
“The major advantage for our customers is that they are able to source engine parts from an engineering company – the very parts which we use in the remanufacture of our own engines,” Yorke says. “This, in turn, gives them optimum confidence about the quality and integrity of the parts. We are not simply a parts supplier. As an engine component remanufacturer, we have the necessary expertise and experience to be able to identify quality parts.”
Yorke says that while many aftermarket companies are content with offering copycat parts by attempting to duplicate the look of the original, IPD has taken the position not only to provide products that perform as well as the original, but also to work with its customers worldwide to find ways to improve engine performance or engine life.
“This achieves greater savings in long term cost per hour for engine owners and customers can rest assured that all parts are covered by IPD’s technical and warranty support programmes.”
The current product line offers both wide and deep coverage for engines in the older Cat 300 series to the later 3500 series. This coverage helps IPD distributors to competitively offer engine owners overall lower costs.
Innovation is an IPD driver and examples are the company’s exclusive grooved connecting rod for use in Cat 3400 Series engines.
“This can reduce cavitation and extend bearing life,” Yorke says. “In fact, some of these engines were known for low hour failure or costly preventative maintenance bearing roll-ins.”
Another personalised product line is the IPD Crevice Seal Style Liner for Cat 3400 Series engines, which can help to substantially reduce the amount of cylinder liner movement and o-ring failure.
“IPD was one of the first companies to offer Induction Hardened Cylinder Liners for use in Cat engines,” Yorke adds. “For years engine remanufacturers and engine owners were forced to deal with only one source on newer applications using articulated steel crown/aluminium skirt two piece pistons,” Yorke says. “After years of development and testing IPD has introduced the IPDSteel one-piece steel pistons for applications such as the Cat 3400 and C15 Series.”
With IPD’s release of the latest line of engine replacement parts for the popular Cat C Series engines, Metric Automotive Engineering now has a genuine competitive advantage in the rebuild market.
In addition to the C Series engine parts, IPD has developed parts for other engine families including the CAT 3116, 3126, 3300, 3400 and 3500 Series engines. IPD’s C Series parts range includes basic overhaul kits, cylinder kits, bearings, IPD Style 1-2-3 and multiple style gasket sets, valve train, cam and pin bushings.
“The 1-2-3 gasket sets are an excellent example of how IPD listens to what the market wants and adapts its offering accordingly,” Yorke says. “These sets are application-specific, so the customer doesn’t pay for parts that are not needed.”
IPD Style 1-2-3 sets offer three basic options: an out-of-frame overhaul set, an in-frame overhaul set and a multiple cylinder head replacement set designed to correctly install all the cylinder heads on an engine, being far more complete than a simple upper set or head set. Other optional sets include water pump rebuild kits, water pump installation sets and single cylinder head replacement sets.
“While most other engine rebuilders need to buy in their replacement parts, we have the tremendous advantage of an in-house stockholding of high quality Cat-equivalent parts. This effectively positions us as a preferred supplier for heavy duty remanufactured diesel engines,” Yorke concludes. “By eliminating the middle man in parts purchasing, we are able to pass on a substantial cost saving to our customers, at the same time maintaining total control of quality throughout the remanufacturing process.”