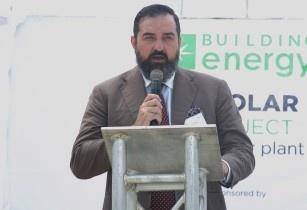 During the event, which will run till 14 June, Building Energy will take part in two panels session “Claiming a larger share of the energy mix and incorporating wind projects into the bigger picture” and “The rise of mega projects and how will accelerated solar development impact the energy mix?” and will be present with its own stand.

With an integrated business model, Building Energy covers a fully green energy value chain, from the engineering and development to the actual investment and construction of the generation assets.

Due to this well-established model, the company has a particularly strong presence in Africa and the Middle East with a gross capacity of 328MW of plants - in operation, under construction or under development - divided into three different technologies, 171 MW from Solar plants, 152 MW from Wind and five megawatt from Hydro. Building Energy is also working on a pipeline of 1.8 GW of projects in countries such as Botswana, Mali, Zambia, Namibia, Swaziland, Malawi and Tunisia.

Among its virtuous projects, in April 2018 Building Energy signed a Power Purchase Agreement with the South African utility Eskom Holdings SOC and an Implementation Agreement with the South African State for the construction, ownership and operation of a 147MW wind plant in Roggeveld, in the Laingsburg area between the Northern and Western Cape Provinces, which will generate approximately 613 GWh per year.

An agreement for a 4.7MW small-hydro project in Kruisvallei, in the Free State Province, was also signed with Eskom and the South African State in April 2018, which has started construction at the beginning of 2019 with Commercial Operation Date scheduled in September 2020. The Tororo Solar North Power Plant, which reached commercial operation in Q3 2017, is the first photovoltaic system developed, built, owned and operated by Building Energy in Uganda.

Matteo Brambilla, managing director for Africa and the Middle East, said, “This annual meeting gives us the chance to identify new opportunities for our business, strengthen or form new partnerships and keep growing.”