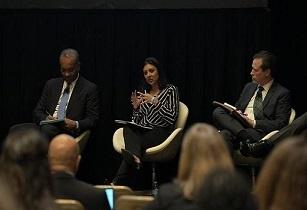 John Irons, deputy coordinator for Power Africa and members of the U.S. African Development Foundation, the U.S. International Development Finance Corporation and the U.S. Department of the Treasury joined Sumar at the plenary session of the summit.

Sumar commented, “In developing countries, one of the major obstacles to reducing poverty and creating sustainable economic growth is an insufficient, unreliable, or unaffordable electricity supply. Nearly one billion people around the world lack access to electricity. This stifles investment, increases costs of goods and services, and often forces families to seek electricity sources that are expensive and environmentally unfriendly.”

To help address this, MCC is deploying significant resources in countries such as Ghana, Senegal, and Benin toward grid capacity, modernising grid management, and attracting private investment.

Roughly two-thirds of the agency’s more than US$15bn in global investments have been on the African continent. However, with Africa having one of the fastest growing middle classes in the world, the need for modern energy solutions is higher than ever.

“International cooperation is absolutely critical to ensuring we meet Africa’s development needs,” added Sumar, “and Power Africa plays a key role in facilitating that coordination for the United States.”

MCC has a long track record of working with Power Africa, one of the world’s largest public-private partnerships (PPPs). Through PPPs such as Power Africa, MCC is delivering clean, renewable energy to families and businesses in countries such as Benin – where its off-grid solar kits have reached more than 60,000 Beninese to date.

“Climate change is a defining issue of our time,” said Sumar. “We are stepping up our efforts and have made a commitment that more than 50% of our programming funds will go toward climate-related investments over the next five years.”