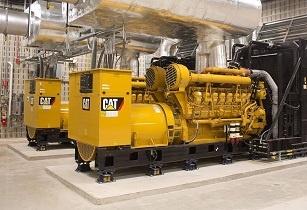 Mantrac has successfully supported Koidu Limited, one of the largest underground diamond mining companies in West Africa, when it struggled to receive reliable power from the grid for its operations in Sierra Leone

The ability to produce power on site is critical for continuous operation, and significant capital can be lost without it, due to fleet downtime. Koidu recognised the need for this and approached Mantrac for help as it did not have a reliable power grid to tie the mine into.

The first scope of Mantrac’s response was to supply two generators to replace two older units from the seven in the site’s powerhouse. Eventually five Caterpillar 3516 Diesel Generator Sets were supplied, with the potential to increase the powerhouse with three or four additional units.

At the early stages of installation, some serviceability issues were encountered on one of the generators. However, this was quickly overcome as the company immediately set to work rectifying the issue. Koidu reported the problem in the morning and by the afternoon Mantrac had a new module on site with technicians that performed the installation.

Christopher Chakawodza, head of engineering at Koidu, commented, “One of the biggest advantages of this solution was firstly its simplicity. The original solution provided by another brand was complicated, with too many moving parts and often susceptible to lightning. The DeepSea controller was easier, and the Caterpillar gensets interface with the DeepSea was also very good.

“The technicians who were deployed on site had an exceptional knowledge of the DeepSea controller, which made the interface even better. And then the actual response you get from the Caterpillar genset is far superior to the other gensets that we have.”

Representatives of Koidu were not just impressed with the performance of the gensets but also the payment plan and support included. They highlighted the good cashflow position due to the payment terms put forward. Having a support team based in the country means that if anything goes wrong, support is assured within a short space of time and spare parts and consumables are also readily available if needed. This was especially important and impressive as the site is in a remote location, and the lengthy time waiting for service providers to arrive on site was previously detrimental to business – something that is no longer a problem.

Miles Van Eeden, deputy general manager of Koidu, said, “Mantrac has outperformed the competition in terms of adjudications received on this project. They’ve brought to the table telematics, smart solutions, web-based features which we have never had before. It is more manageable, and we are working smarter instead of harder.”

Ahmed Farghal, sales manager at Mantrac Sierra Leone and Liberia, added, “As we say, this is a partnership. We support them and make sure all machines are working without any problems. We try to minimise costs as much as we can by good planning between us and them. Whatever they want, whatever the response needed, we can do it.”

Learn more about Mantrac range of Caterpillar generators at: https://www.mantracgroup.com/en-sl/products/new-power-systems/