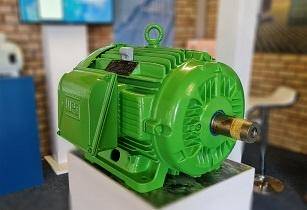 This is a huge advantage in the African market allowing the company to produce economically and deliver promptly to countries throughout the region.

Not a company that is fixated on next quarter results only, WEG thinks and acts long term and considers Zest WEG as crucial to its future, given Africa’s enormous growth prospects which include a need for massive investments in energy infrastructure.

Responsible for the entire sub-Saharan region Zest WEG works through an extensive network of branches and Value-Added Resellers (VARs) throughout the continent.

Most of Zest WEG’s product offering will be on display at the upcoming Electra Mining Africa 2022 exhibition. One of these will be its WEG IE4-rated super-premium efficiency electric motor which is the most energy efficient motor available on the market and offers major operating cost advantages to users.

Electric motors account for about 40% of all industrial electricity consumption with around two-thirds of these motors found on mines, powering everything from fans and pumps to conveyor belts and screens. WEG IE4 motors have already received a warm reception from the mining industry, which is struggling with constantly rising electricity costs and the potential for significant energy and cost savings is huge.

Zest WEG will also showcase other high-tech products and systems including the WEG Motor Scan, which allows continuous monitoring of electric motors and other rotating machines. Also on show will be WEG’s new Motion Fleet Management system, which uses artificial intelligence and machine learning to diagnose and monitor rotating equipment such as motors, VSDs, gearboxes and compressors. Based on cloud computing technology, the performance of assets can be monitored at any time from any part of the world.

WEG has fully embraced the world of Industry 4.0, and keeping abreast of digital developments is a priority with Electra Mining Africa providing an opportunity to show just how far the company has come on its digital journey.