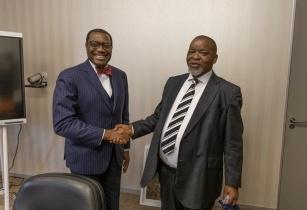 Adesina told minister for Mineral Resources and Energy, Gwede Mantashe, that the bank was in the process of setting up an African Energy Transition Facility to help South Africa secure adequate financing for its energy transition.

The AfDB estimates that South Africa would need more than US$30bn for transition to renewable energy.

Adesina and Mantashe met in South Africa’s Pretoria and discussed a range of opportunities for the country, which relies on coal for 75% of its energy needs. They also discussed the impact on Africa of Russia’s war in Ukraine, which has already led to an increase in the prices of food, fertilizer, oil and gas.