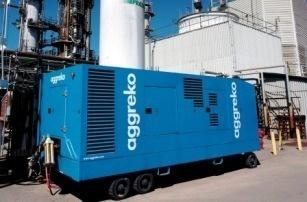 Aggreko has expanded its gas-fired power plant at GigawattPark in Ressano Garcia, Mozambique to now enable supply of power to Namibia

The project was inaugurated recently by Mozambique’s minister of energy Salvador Namburete. The extension has added an additional 122MW of capacity to the Ressano Garcia facility, bringing the total generation output from the plant to 232MW.

The Aggreko power plant began operating in July 2012 as part of an initiative to build a cross-border Independent Power Producer (IPP) project. Power generated on site was supplied directly into the Southern African Power Pool (SAPP) with the first off-takers from the project being Electricidade de Moçambique (EDM), the Mozambique power utility and Eskom, the South African power utility.

Aggreko Europe Middle East and Africa regional managing director David Taylor-Smith said, “Ressano Garcia is the world’s largest cross-border interim power plant, with 232MW of gas-fuelled power generation being utilised by three national utilities. This project highlights the precision and speed in which Aggreko can deliver large-scale temporary power capacity, to help our customers address gaps in energy supply as and when they arise.”

NamPower managing director Paulinus Shilamba said, “This innovative approach to securing an effective power supply for the people of Namibia is a great example of the spirit of southern African cooperation. This unique project will contribute to the provision of a reliable power supply across Namibia and support the continued development of the country.”