The 3rd edition of the AFSIA Solar Awards 2022 was held at the Africa Energy Forum (AEF) conference in Brussels, with the winners of 13 categories revealed 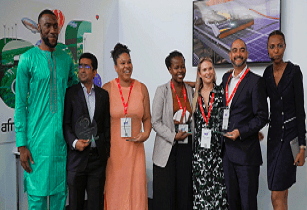 The awards ceremony was organised in collaboration with the Africa Energy Forum and was held live in Brussels. (Image Source: AFSIA)

Over the last few months, more than 130 entries from all over the continent were submitted in various categories. Some of Africa’s top solar energy experts made up the jury which reviewed and analysed each entry. The most deserving companies and individuals were therefore eventually selected and received their prize at the awards ceremony.

The most contested title this year was the ‘C&I Project of the Year’ which highlights the increased activity of those segments of the African solar industry as well as its positive trend of growth.

The winners of the AFSIA Solar Awards 2022:

•Mini Grid Project of the Year: Nuru for the two solar hybrid mini grids of 338kWp in Tadu and Faradje.

•Productive Use of Application of the Year: Solektra Rwanda for the SunMoksha’s IoT and cloud-based Smart AQUAnet’s system which is designed to help small and marginal farmers operate a shared irrigation system/resource.

•Solar Innovation of the Year: GreenBox for the 100% solar-powered walk-in cold rooms reducing food waste by 80%.

•Video of the Year: CrossBoundary Energy.

•Deal/Financing Programme of the Year: SunFunder for the new US$500mn Gigaton Empowerment Fund.

•Solar Entrepreneur/SME of the Year: USAFI GREEN ENERGY for its partnership with Allsolla to provide solar-powered computers that come with four extra bulbs and free network for the kakuma refugees camp.

•African Solar Company of the Year: CrossBoundary Energy for currently operating the largest portfolio of RE PPAs in Africa at ~120MWp of solar generational capacity and ~40MWh of storage capacity.

•Advisor/Consultant of the Year: Harmattan Renewables for the Oya project, the biggest hybrid project (solar and wind with battery) in Africa.