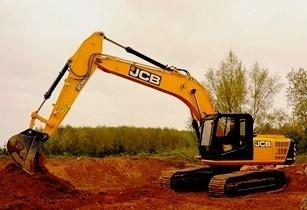 The inaugural edition of bauma Africa, which has been taking place in Johannesburg this week, has seen the launch of a host of construction machinery products targeting and tailored to the African market

A number of international companies, including JCB and Terex Finlay, have used the trade exhibition to launch products in Africa, some of which have been designed or refigured to target the demands of a growing African customer base.

JCB has launched the new 20-tonne JS205 crawler excavator, which will replace the JS200HD, and will be sold in markets throughout Africa, India and Asia at the Johannesburg show.

According to JCB director of overseas regions, Patrick Massardy, the machine, which features a 5.9-litre six-cylinder engine, will help African customers who have to face up to the difficult challenges associated with maintenance.

"The JS205 crawler excavator will work in very tough conditions and throughout the year," said Massardy.

"It is reliable, even when using poor-quality fuel, and will offer owners fuel savings of up to 10 per cent annually.

"The JS205 is an outstanding achievement by JCB’s engineers and will definitely appeal to African markets and customers," he added.

Eazi Sales & Services has used the show as a platform to launch its new three-in-one rotational machine, as well as the world’s largest telehandler, while Pilot Crushtec International, who has launched a fleet of new products at the event, has one of the largest mobile crushers to have ever been exhibited in Africa on display at its stand.

The event has also provided manufacturers who launched new products and machinery while exhibiting at bauma Munich back in April 2013 to officially launch their latest innovations in Southern Africa.

Nigel Irvine, sales and marketing director at Terex Finlay said, “bauma Africa has given us the opportunity to launch the new I-100 impact crusher to the southern African marketplace following its unveiling at bauma in Munich.

“We’ve had fantastic acceptance from the marketplace to this machine in Europe, the Americas, and Australasia, and we expect it will enjoy similar success here in South Africa.”

Aside from new launches, a large number of exhibitors have been utilising their attendance at the show to develop and expand their African networks at a time when many construction machinery firms are witnessing their sales drop in traditional markets such as Europe, and while investment on infrastructure projects across the African continent is continuing to grow.

Giuliano Parodi, vice-president of sales, marketing, service and dealer development at Doosan Infracore Construction Equipment, said, “The focus for the next 15 to 20 years for us will be on Africa. We believe there is a lot of potential here and that Africa is the future.

“We are looking for partners in a number of African markets as this is where we want to expand our business.”

The event, held at the Gallagher Conference Centre in Johannesburg, will run until 21 September 2013.