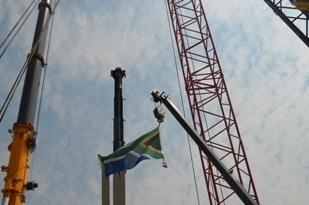 Of the show's 754 exhibitors, 123 came from South Africa, which not only reflected the huge interest domestically in the show, but highlighted the intense focus currently being paid to the continent's construction sector by companies from as far afield as China, Europe and the US.

The first edition of the trade fair, which its organisers MMI South Africa have already confirmed will return to Africa in 2015, took up more than 40,100 sq m net of space, making it the largest industry event for its sector in Africa.

"This is huge for South Africa and the industry here," she said. "With its premiere, bauma Africa has immediately become the largest show for the construction machinery, building material machines and mining machines sector."

Crewe's enthusiasm was seemingly shared by the show's exhibitors – especially those fortunate enough to enjoy the sunshine, which bathed the outside area of the show for the exhibition's first three days.

Construction and Mining Equipment Suppliers‘ Association chairman, Lawrence Peters, was among those who said the show met his organisation's expectations.

"This show is what we wanted, it is for the industry," Peters noted. Sandvik South Africa vice-president Glenn Schoeman, meanwhile, declared that not exhibiting at the exhibition would have been "a big mistake".

"We had only quality visitors from countries we needed and sold several machines right here during the show," Schoeman remarked.

Quintin Booysen, marketing and sales manager at PMSA, said that the show surpassed the firm's expectations and commented, "Next time we will be back with twice the space, because I’m sure that there will be twice as many visitors."

Shantui Equipment Southern Africa director and vice general manager for Shandong Shantui Construction Machinery Import and Export Company Limited, Dylan Chicken, claimed to have been "overwhelmed" by the feedback the company received on the quality of its booth at the show.

"I think that people expect a certain thing from a Chinese manufacturer, so we took the trouble and care for our booth to reflect our values and our excellence in the market," Chicken said.

"We have shown the market how serious we are and have reflected all areas of our business. We have been delighted with the value and culture of bauma, when compared with other equipment shows in the market, and there has been a strong standard of excellence from the organisers and attendees."

Chicken, who spoke to African Review on the afternoon of the second day of the show, said the company had, at that point, seen several thousand visitors at the event.