AfDB seeks partnership to lift one billion people out of hunger 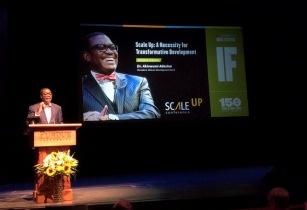 The bank said in a statement that it was leading the way by investing US$24bn in African agriculture over the next 10 years.

Akinwuni Adesina, president of AfDB, told in an agriculture conference at Purdue University in Indianapolis mentioned that the number of hungry people in the world had increased from 777mn in 2015 to 815mn in 2016, despite the statistics showing a decline in the global population living on less than US$2 a day.

Adesina told the audience that simple technical and scientific methods were already making a difference to farm yields and income in Africa, while such technologies to deliver Africa’s green revolution exist; they are mostly just sitting on the shelves.

“All Africa needs to do is to harness the available technologies with the right policies and rapidly raise agricultural productivity and incomes for farmers and assure lower food prices for consumers,” he vocalised.

AfDB has launched its US$1bn technologies for African agricultural transformation (TAAT), to extend the use of farm technologies. TAAT currently engages seed companies, public and private entities and financial institutions in 27 countries to provide technology to 40mn African farmers.

Combining targeted subsidies for farmers with a market-based system for fast-growing access to finance for farmers and agricultural value chains is the fastest way to get many people out of poverty and on to a sustainable path of economic growth, Adesina added.

Adesina explained that the situation in sub-Saharan Africa was particularly urgent due to the devastation caused by climate change. The international food policy research institute estimates that Africa will starve 38mn people by 2050 due to climate change.

“The AfDB put feeding Africa as one of its topmost priorities when it launched feed Africa strategy in 2015,” said the bank president. The feed Africa strategy supports the development of policies, markets, infrastructure and institutions that ensure that agricultural value chains are well developed and that technologies reach millions of farmers.

“The SCPZs will create markets for farm produce. Raw materials will no longer be moved out of rural areas, but as finished value-added products. Post-harvest losses will be substantially reduced. Well integrated agricultural value chains will develop, with supportive logistics, especially warehousing and cold chains,” Adesina added.