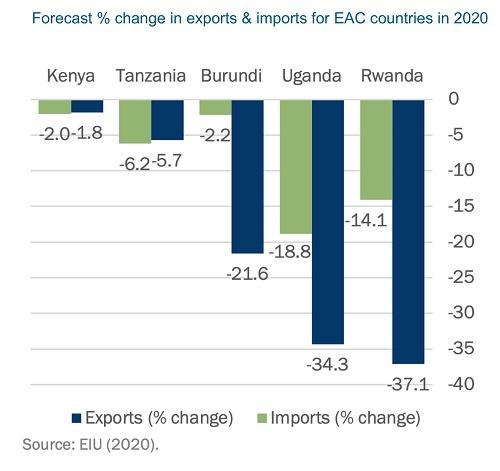 In a presentation to kickstart GTR East Africa 2020 on 1 October, he highlighted that trade had dropped by 13% to US$44bn in 2019 due to weaker global demand.

The impact of Covid-19 on East African economies has varied greatly, with Kenya and Tanzania trade down by only 2% and 6% respectively while Burundi, Rwanda and Uganda have fared worse, suffering a massive slump, especially Rwanda and Uganda whose exports have declined by more than a third.

George said, “Part of the reason Kenya appears to have done better is that we have seen a real drop in imports and re-exports. This reflects flattening demand across the region, but set against this, we’ve also seen exports actually went up for the first half of the year. It’s possible that estimate from the EIU, might actually see a rise in Kenyan trade overall for the year.”

But the reality is that there is a huge impact of local demand and interregional trade.

He said, “Most of us working in East Africa are involved in interregional trade. It [Covid-19] has really impacted those flows across those countries and a huge impact on businesses as well.”

China and the EU remain the dominant trade partners with the EAC region. China has continued to grow its share of East Africa’s bilateral trade to more than 140% over the last ten years to an estimated US$9.2bn while in EU it has been “broadly flat”.

George continued, “Intra-African trade remains the single most important point of the EAC trade. But it is losing ground to China. This partly reflects the fact that a lot of the imports are electronics, capital and consumer goods come from China. From we’ve seen at the beginning of this year with the drop in intraregional flows, it’s possible that we might see China becoming the key trade partner for East Africa by the end of the year.”

He also stated that Africa “has finally passed the digital tipping point”. According to the GSMA, an industry organisation that represents the interests of mobile network operators worldwide. It estimates that half of Africans by the end of this year, will own a smart phone and have a 3G connection, which is paramount to connecting to digital services.

“Everyone in the value chain in East Africa is effectively connected digitally. This really opens up possibilities in terms of serving them and also in terms of gathering information from them for everything that passes through the value chain.”

Mobile phones are not the only area of digital innovation, with at least 500 tech hubs now established across Africa, including a major tech hub in Kenya.

“There are a real range of different fintechs in the market, whether it is e-wallets or payment solutions, loans and savings, blockchains and the tech hubs themselves, we are seeing huge growth in innovation in East Africa and this is coming through in how business is carried out, but it is also affecting how trade finance and commodity financing is functioning in the region.”