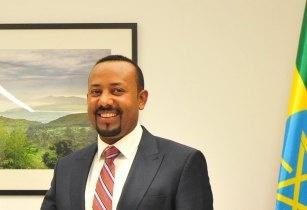 Ethiopia's economy and wealth levels have been growing strongly at nine per cent per annum on average for the past five years, however, underlying political tensions risks derailing economic activity, according to Moody's Investors Service

At the same time, volatile export earnings have intensified pressures on its external position.

Moody's Investors Service report has addressed a number of investor questions on these trends and their likely impact, if any, on the sovereign credit profile.

Commenting on the areas of reforms, the report said that the reform efforts have been focused on increasing private-sector involvement in the economy, improving infrastructure, increasing efficiencies in goods and services markets and easing the burden on the government balance sheet.

“At this stage, it will take time for benefits to be realized and they carry a plethora of implementation risks. Much of the reform's success will depend on the buy-in of the Ethiopian People Revolution Democratic Front (EPRDF) coalition, of which some members appear sceptical about the prime minister’s market-oriented focus,” according to the report.

Regarding the risks that are present in Ethiopia’s political environment, it noted that risks are unlikely to dissipate in the run-up to elections scheduled for 2020, as the government's reform agenda risk exacerbating ethnic tensions in some parts of the country. In Ethiopia, these persistent political challenges are likely to be felt most prominently via any impact on investor perceptions, given that some sectors of the Ethiopian economy are heavily dependent on foreign direct investment (FDI).

Although the government's gross borrowing requirements are moderate at around five per cent of GDP, this conceals a high level of external payments relative to foreign exchange reserves. Moody's estimate public external debt amortisation of US$1.7bn in fiscal 2020, which is equivalent to half of our estimated level of reserves for end fiscal 2019.

Ethiopia is implementing a wide-ranging reform agenda to increase the private sector's involvement in the economy; improve critical infrastructure; generate efficiencies in the market for goods and services and ease the burden on the government balance sheet. These reform and privatisation agenda is mainly focused on the energy, telecoms, logistics and airlines sectors but there are some meaningful reforms taking place in agriculture and banking as well.