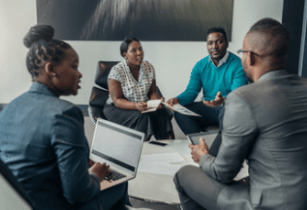 Africa is facing turbulence in the political atmosphere in many parts. These include Zimbabwean riot; unrest in Congo; terrorist attacks in Nairobi; Islamist insurgencies in Mozambique; election violence in Nigeria; terrorism in Mali and the Sahel region; revolution in Algeria and Sudan; elections in South Africa etc. These eventually cost economic unrest, disrupting commercial operations and creating uncertainties over trade flows.

The risks outlook in Nigeria is improving with the country’s growing oil sector. In 2018, Nigeria exported around US$50bn worth of crude oil and related products, most of these to countries like India, The Netherlands and the other parts of Europe, as well as South Africa and other Asian countries. The imports of oil from Nigeria are increasing in these countries.

The increase in oil outlook both in price and output helps Nigeria meet its tentative and gradual economic recovery. Inflation is stable and the country is moving to borrow more from Eurobond as well as commercial markets to boost its spending on developing regional infrastructure.

Going forward, the Nigerian government is expected to be more active on economic and political policies. President Buhari has given some indications that he might move towards privatisation in the oil sector or other currency exchange programmes that are set to improve Nigeria’s outlook.

Violence recorded over the past years such as the threat of protracted labour action at mining companies and public utilities, instances of suspected ‘economic sabotage’ and more frequent political unrest and backlash against political investigation led South Africa’s economy contracted by 3.2 per cent in the Q1 2019 and may fall into recession in the second quarter.

The latest forecast from the IMF, showing South Africa’s economy growing in an annual basis by 1.2 per cent, is very likely to be revised downwards. Most analysts are now seeking an estimate of around 0.7 or 0.5 per cent growth this year. This is mostly because of political instability that is driven by a lack of settlement following elections in South Africa.

Algeria has seen a downgrade in its economic forecasts. Inflation is spiking and the government is borrowing more to fill its budget deficit and to match the falling foreign exchange reserves. Even though Algeria was supposed to mark a tentative economic recovery over the course of this year, the IMF has downgraded to expected growth forecast of 2.3 per cent.

Given the continuous uncertainties, it may further downgrade to attain the slowest economies in Africa, coming to the same category as countries like Zimbabwe or Sudan which have seen similar political transitions, Besseling said.

Besseling added that EXX Africa is doing a lot of work at the moment to support risk mitigation efforts in Mozambique. Additionally, some of the developments in the country are exciting for infrastructure development and other mega projects that come on the backwaters.

Over the past two years, there is a steady increase in the insurgency in the very north Mozambique, on the border with Tanzania, where counterinsurgency tactics have so far proven ineffective and sometimes actually exacerbates the problem causing mounting local community grievances.

After the attack on the convoy of Anadarko’s oil and gas workers at the beginning of 2019, Mozambique has seen further attacks that have affected natural gas workers. According to Besseling, the deception of risk may in fact drive some of the investment away and cause further commercial disruption, which comes at a time when Mozambique is recovering from a dire economic crisis, desperately needing FDI which could reach US$50-60bn over the next 10 years.

Inflation and the growth forecast have stabilised. Most importantly, Mozambique is now moving towards an agreement on the restructuring of debts with some of its bondholders.

Cost of political and security risk to African supply chain

According to Agility’s Emerging Markets Logistics Index 2018, many top supply chain risks in sub-Saharan Africa related to political and economic concerns. In North Africa, terrorism (43.8 per cent) and government instability (19.9 per cent) together represent almost two-thirds of the primary concerns. Additionally, industry professionals cite corruption (23 per cent), government instability (18.3 per cent), terrorism (nine per cent) and piracy (4.1 per cent) as major risks.

Besseling explained that each country has a different political risk outlook depending on the size and growth of the economy among other important metrics. Nigeria is expected to reach a half trillion dollar economy at the end of this year whereas other countries like São Tomé and Príncipe may struggle to reach around half a billion dollars GDP.

The other important metric is the growth of the economy. It is beyond doubt that the deals can be done across all of Africa including countries like South Sudan, Libya and Somalia but it is the fastest-growing economy in Africa which attracts the most trade and investment. Therefore, countries like Ghana and Rwanda which have relatively benign political risk outlook and growing at a fast rate seem to be more stable locations for investments than others.

According to the African Development Bank (AfDB), Africa needs US$150bn on an annual basis for infrastructure development. The current funding gap stands between U$30bn and US$40bn a year.

The AfDB said that there is a growing need for more diversified sources of funding, from the home-grown pension find industry (South Africa and Nigeria) to international insurance firms, to join MFIs, DFIs, government agencies and private-sector firms.

According to Besseling, some of the risk mitigation strategies in Africa could be:

· Corporate security elements: To improve the resilience and continued survival of a coporation.

· Due diligence and KYC processes: Understanding the business partner and how this affects the supply chain.