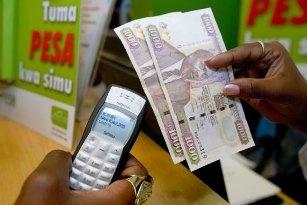 Imagine a world where you can pay school or health fees, open a savings account and earn interest, withdraw money from an ATM machine (no ATM card necessary), and conduct a host of other transactions just with your mobile phone. While this may seem like a vision from the future, it is already a reality in Kenya, a low-income country with a population of 40mn and a nascent telecom industry.

Michael Joseph, outgoing CEO of Safaricom Ltd, is the man who started M-Pesa, the first mobile money application to reach scale and enable the above services in Kenya. He explained M-Pesa at a World Bank event organized at the Bank’s headquarters in Washington. The panel also included World Bank Lead Economist Wolfgang Fengler, Managing Director of the World Bank Ngozi Okonjo-Iweala, and Information and Communication Technologies (ICT) Sector Manager Philippe Dongier. It was moderated by Shanta Devarajan, chief economist of the World Bank Africa Region.

M-Pesa, wherein “M” stands for “mobile”, and “Pesa” means “money” in Kiswahili, is the world’s largest mobile-money platform. It has succeeded in bringing quasi-financial services to a large segment of the Kenyan population that previously had little or no access.

Joseph shared how he took over the helm of Safaricom in 2000, then a relatively small mobile company, and grew the mobile subscriber base by a factor of 1,000 to almost 17mn customers today. Out of these, 13mn customers actively use the M-Pesa platform for payment transactions.

Managing Director of the World Bank Ngozi Okonjo-Iweala remarked that M-Pesa is the ideal story of why it pays to invest in the poor. “Africa has a culture of saving but people often do not have the mechanisms to save,” she said. M-Pesa provides a low-cost transaction platform which Kenyans can use to save.

Launched only three years ago, Joseph explained how M-Pesa achieved such large scale success in Kenya, and outlined the key elements for replicating its success. Building trust with consumers using a strong brand, and making it accessible even in the remotest of villages are both important. Safaricom also made it a point to offer superior customer service and built up a strong agent network through which customers could exchange electronic balance for hard cash. M-Pesa currently has 23,000 agents dispersed throughout Kenya.

Working to develop products quickly to meet customer needs is also crucial. At Safaricom, a product can be taken from idea to launch within six months, said Joseph. He discussed the role of industry regulators and the need to follow their guidance even if it is not mandated by the law in order to strengthen the regulator’s confidence in mobile financial transactions.

“Without the telecom sector, growth would have only been 2.8 per cent, barely matching population growth. Now, we see that ICT is starting to transform other areas of the economy, especially the financial sector,” Fengler pointed out.

"Given the difference between the level of access to mobile phones and access to bank accounts, mobile banking has the unique potential to bridge the gap between the banked and the unbanked,” Dongier said.
He also identified similar transformational opportunities combining the use of mobile phones, geo-spatial tools and citizen feedback to improve good governance and accountability.

Let me “M-PESA” you some money

Joseph ended the session by stressing the need to continually innovate to meet customer needs, which in this case, are the poor and underserved. He cited the recently launched M-Kesho, which enables any M-Pesa customer the ability to start saving with as little as $1 and earn interest on the principal. “Kesho” is Kiswahili for “tomorrow” or the “future.” Joseph mentioned that in the short time since its introduction, M-Kesho has resulted in approximately 650,000 users opening saving accounts.

Joseph shared that M-Pesa has become so ubiquitous that customers have even turned the name of the platform into a verb.

“M-Pesa is so successful, now it has become a part of the Kenyan vocabulary and is used to describe mobile payments: people in Kenya now ‘m-pesa’ their money,” he said.