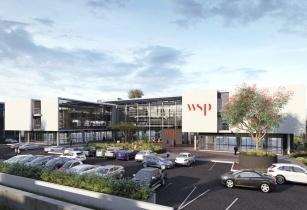 WSP in Africa, one of the largest multi-disciplinary engineering consultancies on the continent, has recently moved into its new headquarters (HQ) for their operations and work into Africa, with the building in Bryanston houses all of the company’s Johannesburg-based employees

WSP’s new HQ building is the first of seven buildings planned to be completed, as part of Emira’s project to redevelop the entire Knightsbridge office park. Construction of the building began in January 2016 and the company took occupancy on the 4 September 2017 – the building measures in at 5 800m2, over three floor plates and a beautiful rooftop garden that speaks to the overall biophilic design of the building.

Mathieu du Plooy, Managing Director, WSP in Africa, says: “This is a development that we are very proud of. We were able to play an active ‘hands-on’ role in designing a place where our people - our immediate community – can be inspired, innovate, collaborate, create and thrive.”

As the anchor tenant for the first phase of the redevelopment project, WSP played a pivotal role in the design of not only the company’s own new building, but the layout and planning of the precinct. For the construction of their new HQ building, the company provided a full host of design consulting services – across civil, structural, mechanical, electrical and electronic, plumbing, fire and sustainability – and worked closely with the architect, project manager, quantity surveyor and full construction team, which resulted in a better coordinated outcome.