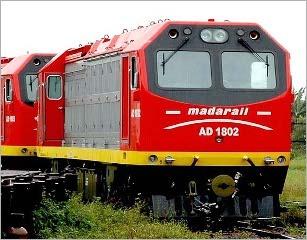 Tognum Group company MTU South Africa (PTY) Ltd, supplier of combustion engines, complete propulsion and power systems in southern Africa has reached another milestone with its engine’s performance and reliability on the Madarail project in Madagascar.

The five locomotives, equipped with MTU 12V4000R41 engines, have successfully accumulated 15,000 operating hours each in approximately 30 months without any unscheduled downtime. Engines for capacity

The Madarail project was inaugurated in 2007, when MTU equipped the five new locomotives manufactured by China South Rail – Sifang with engines. The new AD1800 class locomotives have increased the capacity of Madarail freight to 700,000 tonnes p.a.

“We are pleased at the results and the success we have achieved with the Madarail project.

“MTU is confident that our engines will continue to meet the requirements and high expectations of our clients as well as benefit them,” says Michael Baumann, Managing Director MTU South Africa. More productivity for less cost Powered by MTU engines, the locomotives have increased productivity and reduced operating costs through the excellent fuel consumption and low maintenance costs.

The engines having reached the 15,000 hour running capacity benchmark, they are now due for the QL3 service interventions. Madarail is the rail operator in Madagascar and has a network of approximately 780km of track stretching from the main port of Toamasina, inland to the capital city Antananarivo, and two branch lines in the North and in the South.