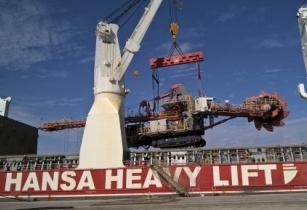 Hansa Heavy Lift has transported a huge shiploader, with the largest unit weighing 513MT and measuring a total of 65,480 cbm, from Belgium’s Antwerp to Angola’s Namibe

The shiploader was transported aboard HHL Valparaiso alongside other equipment including a reclaimer, an elevator and a tripper car, as well as other accessories, with all cargo being discharged at the Port of Namibe.

“This was a challenging operation that required strong engineering expertise and close cooperation with the customer through all stages of the project, from planning to discharge, in order to ensure a smooth and flawless operation,” said Bozidar Ukas, head of offshore, engineering department at Hansa Heavy Lift.

“Due to the equipment’s overall dimensions, with the shiploader measuring 63.5m in length and the reclaimer measuring 57m in length, lifting operations had to be managed meticulously and attention to detail was a must,” said the company.

“We used the vessel’s cranes to add the shiploader’s counterweights for lifting operations and to remove them for the voyage to ensure safe lifting and sailing conditions,” the company added.

Hansa Heavy Lift secured the cargo with extra lashing for the long-sea passage due to the potentially adverse weather conditions, and also made sure that ship movement alongside the quay was minimised.

Mobility and power checks were also carried out due to the length of time the equipment spent in storage.