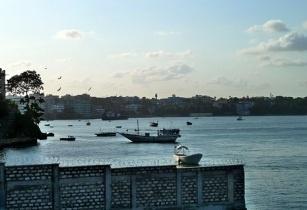 The construction of a second container terminal by President Kibaki in early December 2012 is set to boost efficiency and reliability of the Mombasa port over time. (Image source: SarahOs)

The project, which is being carried out by Van Oord, has been funded by Japan International Co-operation Agency (JICA) within the Special Terms for Economic Partnership (STEP) at an interest rate of 0.2 per cent.

“The terminal will further enhance trade facilitation and economic development in the region and Africa as whole.”

Among the first to dock at the expanded container terminal was MSC Tia, a 261 metre long, 5,000 container ship, which could not have offloaded cargo at the port before.

Issa Muslim, a representative of the Mediterranean Shipping Company (MSC) which deployed the vessel, said that the shipping lines would bring bigger vessels to Mombasa port in the coming days.

The dredging of the existing container terminal is one of the measures being implemented by the Kenya Ports Authority and the government to improve on cargo delivery at the port.

Over the last decade, Mombasa has steadily seen total cargo volumes grow by an annual average of 11.6 per cent compared to a global average of 7.1 per cent.

But the recent commissioning of the construction of a second container terminal by President Kibaki in early December 2012 marked the beginning of the biggest port upgrading investment since the 1980s.

The new terminal is expected to generate at least 1,000 jobs directly and nearly 4,000 indirectly.

The project involves dredging of the channel, land rehabilitation of 100ha, construction of three berths with a straight line quay of 900 metres and the creation of space for container stacking and supportive facilities.

A new access road and a railway link will also be constructed to link the container terminal and the existing port network and the proposed Dongo-Kundu by-pass and the Mombasa-Nairobi Highway on the other end.

“ The increased port capacity will attract new shipping lines to route their vessels to Mombasa and as such create more business in the shipping fraternity hence more employment and revenue to the government,” asserted Ndua.

Meanwhile, a project to install ultra-modern security and surveillance equipment at Mombasa port is almost complete.

The Integrated Security System (ISS) project is being undertaken by an Israeli firm, Magal Security Systems, at a cost of US$20mn given by the World Bank.

The project, which commenced in 2010, is due for completion in March 2013 and will include an electronic fence and CCTV facilities.

“The ISS will complement the visible and undercover patrols by all security agencies in the port. It will also improve efficiency and effectiveness in protecting port facilities and securing people and the cargo,” observed KPA’s retired head of security Mohammed Morowa.

The development is part of the Mombasa port’s long-term goal to conform to International Maritime Organisation standards and comply with the International Ship and Port Facility Security code.

“Issues of theft of containers will be a thing of the past when the system rolls out. The number plates of vehicles entering the port must be recognized by the system or they will not be allowed access,” noted Morowa.

He added that the system is expected to ease traffic flow and ensure faster entry and exit.

At the same time, KPA has received 27 new state of the art terminal tractors from Cargitech of the United States to enhance operations efficiency.

“The machines will enhance fluidity at the container terminal hence reduce the time ships stay at the port,” said KPA in a statement.