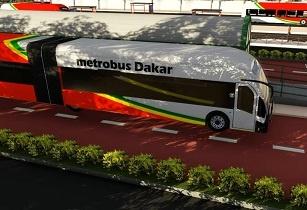 Meridiam,  a global investor and asset manager, has signed a concession contract for the Bus Rapid Transit (BRT) project in Dakar

Meridiam, along with its partners Keolis and Fonsis, will implement the first-of-its-kind project in Africa. It includes the operation and maintenance of a new clean public transport network – which is entirely dedicated to 100% electric buses – for 15 years.

This project will create about 1000 direct and local jobs, of which about one third will be drivers. It is part of the strategy to modernise Dakar’s urban mobility and its transport network by 2025.

It is also a concrete project in favour of the energy transition that offers a solution adapted to the challenge of climate change, but also an efficient alternative to the existing diesel bus network.

Thanks to these electric buses, comfort, safety, regularity and journey times will also be greatly improved. The link between the coastal town of Guédiawaye, north of Dakar, and the city centre during peak hours will be twice as fast, going from over 90 to 45 minutes. Transport costs in the city will be reduced through the implementation of an affordable and intermodal fare policy and social fares for eligible people. Finally, the inhabitants will have easier and wider access to employment opportunities and facilities such as shops, educational institutions, health centres and hospitals.