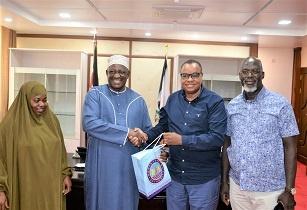 KPA acting managing director John Mwangemi, speaking at the Kwale County headquarters at a meeting with Governor H.E Hon. Salim Mvurya, said that the groundbreaking ceremony for the project is scheduled for April 2022. He added that Kshs 2.6bn (approx. US$22.9mn) has been set aside for the project which is expected to be completed within a period of 24 months after its commencement.

Mwangemi commented that the project will be beneficial not only to Kwale County but to the entire nation adding that it would come with diverse economic opportunities.

According to KPA’s general manager infrastructure development Eng. Vincent Sidai, the key components of the project include construction of a jetty parallel to the existing one, refurbishment of current offices, construction of the yard, cold storage facilities and construction of a fish market.

Mvurya reiterated his government’s commitment in supporting and ensuring successful implementation of the project which he said upon completion would be a game-changer to the economies of the entire region.

“As a county government we are in full support of the Shimoni Port project which we had recognised in our County Integrated Plan in 2013,” he said.