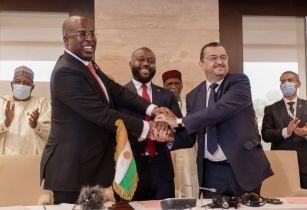 Niger, Algeria and Nigeria have signed the ‘Declaration of Niamey’ during the third edition of the Economic Communities of West African States (ECOWAS) Mining and Petroleum Forum (ECOMOF) in Niamey on 16 February, 2022

Signed by H.E. Mahamane Sani Mahamadou, minister of Petroleum, Energy and Renewable Energies for the Republic of Niger, H.E.Mohamed Arkab, minister of Energy and Mines, Algeria, and H.E. Chief Timipre Sylva, minister of State for Petroleum Resources of Nigeria, the agreement will see the development resumption of the Trans-Saharan Gas Pipeline project.

The gas pipeline of 4,128km will link Warri in Nigeria to Hassi R'Mel in Algeria, passing through Niger. Post completion, the pipeline will carry 30 bcm of natural gas yearly from Nigeria, Algeria and Niger to European markets via Algeria’s strategic Mediterranean cost, as well as supply inland stations along its route. The pipeline will enable Europe to tap directly into the three country’s natural gas reserves, thus diversifying its supply in the wake of the current energy crisis, while creating critical sources of revenue for African gas markets.

Much of the estimated US$13bn pipeline cost will be spent in Niger, acting as a much-needed boost for the already growing energy sector and wider economy. It will also enable Niger to monetise its own gas reserves, estimated at 34 bcm with recoverable reserves of 24 bcm.

Through the completion in 2023 of the Niger-Benin pipeline, from the prolific Agadem basin in Niger to the Cotonou terminal off the coast of Benin, Niger will increase its current production from 20,000 to over 120,000 bpd. This US$2.2bn pipeline will unlock an additional Us$3bn in field development investments by Chinese major CNPC, which is the operator of the Agadem discoveries.

Niger aims to become a hub for hydrocarbons, petrochemicals and associated products in West Africa and the Trans-Saharan Pipeline projects only serves to enhance this trend. The planned energy infrastructures will boost Niger’s growth and position it as a key bridge between resource rich sub-Saharan Africa and the Maghrebian and European markets.