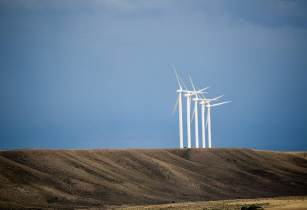 A 200MW wind farm in Egypt’s Gulf of El-Zayt, touted to be the largest in Africa, has been inaugurated

The wind farm cost US$359mn and has been financed by the European Union (EU), Germany’s KfW and the European Investment Bank (EIB). With a 100 turbines, the wind farm generate up to 800MW per year, which could aid around 50,000 people with power. Additionally, it can also contribute to preventing the emission of nearly 400,000 tonnes of carbon dioxide per year.

Overall wind capacity of Egypt will increase by 35 per cent through the project.

EU ambassador to Egypt James Moran, who inaugurated the plant along with Egypt’s minister of electricity and renewable energy Mohamed Shaker, said, “The wind farm in the Gulf of El-Zayt is a leading source of renewable energy that will help bolster Egypt’s economy, create jobs and reduce pollution from greenhouse gases.”

The project is part of the Egyptian government’s plans to bolster clean energy projects that can control fuel shortages and diversify energy sources. This is being done with support from Europe.

Egypt is considered a high potential clean energy hub in North Africa, and if tapped adequately, could go a long way in solving the country’s power problems, believe experts.