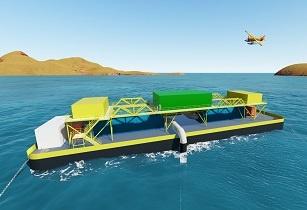 São Tomé and Príncipe and Global OTEC have signed the world’s first agreement to develop a private public partnership (PPP) for the development and deployment of a 1.5MW floating Ocean OTEC platform offshore São Tomé island

The agreement is backed by the SIDS DOCK Bureau comprising the prime ministers of the Kingdom of Tonga and Belize, the President of the Republic of Seychelles and the SIDS DOCK coalition of 32 countries.

Under the initiative of the Global Ocean Energy Alliance (GLOEA), as members and signatories of a PPP, the Government of São Tomé and Príncipe, along with partners SIDS DOCK, the United Nations Industrial Development Organisation (UNIDO) and Global OTEC have arrived at an important milestone. The parties’ signatures of a MoU marks the basis of a mutual understanding of the legal and commercial parameters involving the deployment of OTEC technology to the twin-island nation of São Tomé and Príncipe.

Jorge Bom Jesus, Prime Minister of São Tomé and Príncipe, acknowledged the magnitude of such a project but expressed willingness to pursue a sustainable alternative to fossil fuel imports. He said the agreement is a great step towards environmental and economic progress for São Tomé and Príncipe and paves the way for other SIDS.

The initial OTEC project will contribute towards achieving several UN Sustainable Development Goals as well as undercutting the current levelised cost of electricity (LCOE) by a significant margin enabled by concessionary financing supported by UNIDO.

“The Energy Vision of the People of São Tomé and Príncipe is for ocean energy to play a significant role in their lives, as they learned that Dominique could provide us with baseload energy – energy all the time from the ocean, and also to help with food and freshwater security,” commented Jesus.

“Global OTEC will help realise the people of São Tomé and Príncipe’s Energy Vision. This important milestone shows both public and private sector funds that key terms of a bankable agreement can be reached,” said Global OTEC CEO, Dan Grech.