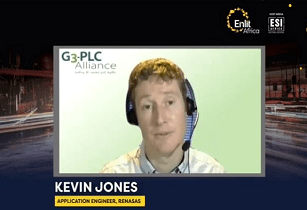 Speaking at Enlit Africa 2021, Kevin Jones, principal engineer at Renesas Electronics Europe and Matteo Varesio, senior software application engineer at STMicroelectronics, explained how the lack of cost-effective and standardised communications that deliver the bandwidth and security for smart grids can often hamper their implementation and development. The G3-PLC meets the challenges of difficult powerline communications with its unique features such as a mesh routing protocol to determine the best path between remote network nodes, a robust mode to improve the communication in noisy channel conditions and channel estimation to select the optimal modulation scheme between neighbouring nodes.

While most of the installations are in Europe, the G3-PLC Alliance has been expanding so it now has a presence in China, Malaysia, Japan, India as well as other pilot trials in South America. In regards to Africa, Jones commented, “One of the earlier adopters was ESKOM in South Africa and we have other regions and installations across the continent as well. Madagascar has over 400,000 metering points, Kenya has around 300,000 metering points, there is STEG Tunisia with around 100,000, not to mention other smaller installations in countries such as Sierra Leone and Ivory Coast. It is clear to say there is plenty installations of G3-PLC in Africa. It is already a well adopted technology.”

Jones explained that G3-PLC is designed for robust and harsh market environments and has a wide range of applications. For instance Siemens are looking at in the technology in regards to electrical vehicle charging. As more electrical motors arrive on the market and receive power from the grid, this has the potential to overload it and so G3-PLC is being considered to monitor, regulate and control this. In regards to renewable energy it can be used to monitor the current production and the status of renewable energy plants. It is also well suited to have precision control over lighting and heating systems in cities and transport systems as well as being able to do things like fault maintenance and detection for lamps.

Opening up more applications is the G3-PLC Hybrid which is the next generation of PLC standard incorporating radio frequency (RF) capabilities, offering extended capabilities for smart grid and IoT applications. As Varesio explained, a single technology often has weaknesses such as a difficulty to reach related meters in rural areas or ones very far from each other. As a result, smart grids can often only cover 90-99% of devices in a network and it can be difficult to reach the 100% mark. This can be costly for utilities and therefore the hybrid solution, which was developed last year, makes it easier to reach every device in a network, saving value for customers.

The hybrid solution has been trialled in some remote and noisy environments, such as a case study in Russia where it covered a mix of rural and urban areas across large distances. Here it recorded very good results, reaching above 99% of devices with Varesio suggesting if “if it works here, it will work everywhere” a promising announcement indicating it would be suitable for use across the African continent.