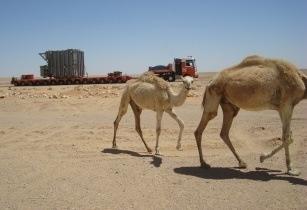 Due to the precise project planning of ETAL and the safe and reliable equipment of Scheuerle, all obstacles could be mastered and the transport arrived in time at its destination safely.

Egyptian Transportation & Logistics (ETAL) transported six transformers from two Red Sea ports to the Giza North Power Station on Scheuerle InterCombi. Due to the precise project planning of ETAL and the safe and reliable equipment of Scheuerle, all obstacles could be mastered and the transport arrived in time at its destination safely.

EgyTrans, mother company to ETAL, has provided integrated global transport services and solutions in Egypt since 1973.

In addition to transporting cargo of exceptional weight or dimensions, ETAL provides a number of services to its customers and guarantees an in-time transport, even if the circumstances are challenging.

In this case they were in fact difficult – a first check proved, that the only way to get the transformers to the job site involved partly barging over the NileRiver from the Tibin jetty to the Khatatba temporary jetty and finally transporting them on Scheuerle InterCombi to the job site itself.

The six transformers of 146.5 tons each made the transport a tough task, due to the difficult road situations.

Especially uneven surfaces challenged the equipment – no problem for the InterCombi with its 650mm axle compensation.

The transport started in Sokhna and AdabiyaPorts on the Red Sea.

The first destination was Tibin jetty, where the 7.42 x4.31 x 5.10 metre-sized transformers were brought to on 14 axle lines of SCHEUERLE InterCombi. 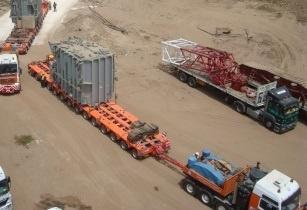 At Tibin jetty, the transformers were loaded on a river barge with a crawler crane.

The barge moved the transformers up the Nile to Khatatba temporary jetty, an offloading facility near Giza power station, built especially for ETAL.

At Khatatba temporary jetty, the transformers were stored and afterwards transported to the Giza North power station site.

Regardless uneven roads or extreme temperatures experienced in the desert - InterCombi platform trailers have been designed to deal with the challenge of both long-distance transport on the road and special operating conditions.

The modular design provides an extensive selection of transportation solutions which are based on two- to eight-axle platform trailers. These can be coupled both longitudinally and laterally.

With a 36-ton technical axle load, the InterCombi is suitable for the safe transport of heavy loads and offers sufficient reserves through the robust construction of the frame, also with extreme loads.

As an extension of the InterCombi series, the InterCombi PB (Power Booster) is available which is equipped with activatable drive axles and, if required, is driven likewise by a activatable PowerPack Unit (PPU), eg, for gradients - without the use of an additional tractor.

This article originally featured in the September 2013 issue of African Review of Business and Technology. To read this issue of the magazine online, click here