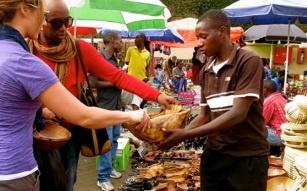 While Kenya’s small and medium enterprises (SMEs) continue to create numerous jobs and boost the country’s GDP, they face a myriad of challenges that always hamper their growth

A recent National Economic Survey report by the Central Bank of Kenya (CBK) indicate that SMEs constitute 98 percent of all business in Kenya , create 30 percent of the jobs annually as well as contribute 3 percent of the GDP.

According to the 2014 survey, 80 percent of the 800,000 jobs created in the year came from the informal sector which is dominated by the SMEs.

“Overall, these businesses help many Kenyans from suffering unemployment while boosting their incomes. Yes, there are challenges but we create jobs as well for others,” observed Sheila Njuki, a business owner in Nairobi’s Jevanjee area where she sells items for interior décor and related items.

She employs one person and has an annual turnover of about Ksh 3 million ($30,000). Most of her merchandise is sourced locally although imported items-mainly from China- are also on display.

Medium enterprises –while not covered by the Act have a turnover of between $ 50,000 and US$8mn and employ 50-99 people.

Kenya’s SME is dominated by the micro and small enterprise and will be found in city estates and along major highways.

The Jua Kali sector where artisans make all types of merchandise from shoes, wheelbarrow, metal boxes and assortment constitute an integral part of the SMEs in Kenya. The artisans produce a variety of high quality hard and soft wood furniture, fabricated doors and gates, priceless pieces of art created from scrap metals and carpets. All items are specially fitted to meet the customers’ needs and tastes. Their products are mainly for local consumption or are exported to nations within the East African Community (EAC) and COMESA regions.

Yet, even with its immense contribution to the economy, Kenya’s SMEs are faced with numerous challenges.

According to a report Deloitte Kenya Economic Outlook 2016, SMEs are hindered by inadequate capital, limited market access, poor infrastructure, inadequate knowledge and skills and rapid changes in technology. Corruption and other unfavourable regulatory environments present other bottlenecks to this vital cog of the economy.

A survey by the Kenya National Bureau of Statistics released early this year indicates that approximately 400,000 micro, small and medium enterprises do not celebrate their second birthday. Few reach their fifth birthday- leading to concerns of sustainability of this critical sector.

Although the World Bank in its report on Doing Business in Kenya in 2017 lauds the country for making progress in making it easier to start a business, major issues remain in smoothening the process.

In Kenya, starting a business involves seven procedures, takes 22 days and costs 21.1 percent income per capita for both men and women.

The World Bank notes that the ease with which businesses can be registered has a bearing on the number of entrepreneurs who start businesses, leading to jobs and more government revenue.

The government has formulated strategies to quicken the processes of starting a business in favour of small firms. It has addressed SME challenges by enforcing legislation on local content for public projects-establishing ‘Buy Kenya, Build Kenya’ policies in public procurement , research and development support and increased funding to funds such as the Uwezo Fund. The Uwezo Fund is a government fronted financial tool aiming to expand access to finances and promote women, youth and persons with disability.

Experts however say that some of the challenges with SMEs are beyond government bureaucracy.

“Most people prefer replicative businesses. Nobody does a market survey to see whether the business is viable,” observed Dr. Bitange Ndemo, an associate professor at the University of Nairobi’s School of Business and a former government official.

But finance remains the most critical challenge affecting the SMEs in the country.

"The critical factor however remains under financing. Few banks or saccos are eager to finance SMEs especially at the inceptions stage,” added Ms Njuki.

To alleviate the financing gaps, the Kenya government in collaboration with partners created the Financial Sector Deepening (FSD) programme whose goal was to expand access to financial services among low income households and smaller enterprises. Funders include the UK’s Department for International Development (DFID), the Swedish International Development Agency (SIDA), and the Bill and Melinda Gates Foundation.

Two years ago, FSD, the World Bank and Central Bank of Kenya jointly conducted a research project in an attempt to understand the supply and demand side of the SME market. The report highlighted the difficulty in tracking the size of the SME and its need for financial services.

According to the research, the evolvement of the supply side of the SME between 2009 and 2013 resulted in rapid expansion of Kenya’s financial sector.