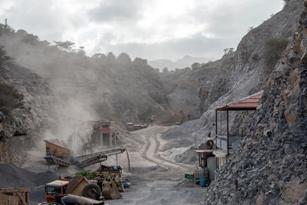 Alongside presidential addresses from the leaders of Botswana and Zambia, the main stage of Investing in African Mining Indaba 2022, held in Cape Town, was graced on the first morning by speeches from key executives as the mining industry gathers to address the critical issues facing the industry

Duncan Wanblad, chief executive of Anglo American, remarked that never before has there been such an obvious demand for what the mining industry does and what it can make possible, explaining that the minerals the industry produces are instrumental in spurring on human progress and development. Now this progress is centred on the drive towards net-zero, with minerals such as copper fundamental to the modern renewable technology.

“The world cannot decarbonise without the products of mining… For example, copper is a critical metal which is now a key ingredient of clean, green renewable and sustainable energy. It is at the heart of every wind turbine, every electric vehicle and every solar farm you see. The point is clear, mining has a long-term role in enabling the energy transition.”

In line with the theme of this year’s conference, ‘Evolution of African Mining: Investing in the Energy Transition, ESG and the Economies’, Wanblad said he was encouraged with the progress industry has taken towards the environment and advancing actions on climate change.

Anglo American has been a pioneer in this regard, as demonstrated by the launch of the world’s largest hydrogen-powered mine haul truck which is designed to operate in everyday mining conditions at its Mogakwene PGM’s mine in South Africa.

Wanblad added that the transition is not just about decarbonising energy, but creating opportunities for shared prosperity, ensuring that no-one is left behind. It is of paramount importance for the continued future of our planet but also represents an opportunity for unlocking growth and economic potential.

“African countries have an opportunity to position themselves in this coming era and harness the benefits this will bring.”

Speaking soon after, Sinead Kaufman, chief executive of minerals at Rio Tinto, took the time to provide an honest look at her company and the mining industry, highlighting the inequalities that still prevail.

Last year the company commissioned an external review of workplace culture which revealed that almost half of people surveyed had experienced bullying, 28.2% of women had experienced sexual harassment and racism was a common issue.

“At Rio Tinto people are our most important asset, and for people to feel valued they must feel safe, seen and supported. For too long people have felt unseen and unsupported… We want to use this opportunity to say that discrimination of any kind is not acceptable and we are making strides to improve this.”

While Kaufman added that she did not think making this report public was an act of courage (highlighting instead the bravery of those who had spoken out) it surely was a significant act which has shone light on these issues within the industry. While addressing the needs of the planet, the industry must also consider these issues and work to eradicate them.

The attendees then welcomed Priya Agarwal, non-executive director of Vedanta Resources and Sunil Duggal, CEO of Vedanta Resources, who explored the close similarities between India and the African continent and how the company is working to enhance their operations on both, with climate and social concerns in mind.

Agarwal said that both are home to the world’s poorest, but the social challenges facing them could be removed through close collaboration to unleash the potential of their natural resources. In pursuit of this, Duggal noted that the company aims to invest US$30bn in growth and expansion over the next 10 years, most especially in zinc, oil and gas, aluminium and steel.

“This is our story, this is our quest. We are transforming for the good of our planet, employees and future generations,” Agarwal concluded.