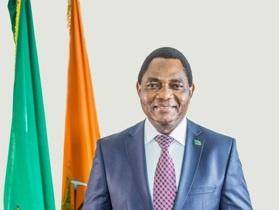 Under the theme ‘Evolution of African Mining: Investing in the Energy Transition, ESG and the Economies’ the first morning of this year’s Investing in African Mining Indaba 2022 was characterised by speeches from key figures such as His Honourable Hakainde Hichilema, President of Zambia

Emphasising his pleasure and privilege at being part of the event, Hichilema, noted that the conference could not have come at a more opportune time, as climate concerns continue to gain momentum.

While he remarked that Zambia is investing more money in renewable energies such as solar and wind in pursuit of decarbonisation, he was keen to stress that the green energy transition also presents a golden opportunity for the continent. Copper, for instance, is critical in the technology which will underpin the transition and it is a resource that the continent, especially Zambia and the DRC, has in abundance. With this in mind the country has set a goal to drastically increase their copper production, something that will not only help the environment but support job creation and domestic empowerment as well.

Copper is one of the many mineral resources that the continent is endowed with, and Hichilema stressed that these key drivers of economic development are here to stay. He added that they must be exploited properly and strategically in order to improve the lives of citizens and get more of the population out of poverty.

“We are tired of talking about African potential. We no longer want to hear people sing the song of potential. We now want to realise that potential, to drive development and alleviate poverty amongst our people. There should be no excuses from us… Our people deserve better.”

To realise the potential, Hichilema noted that it was paramount to build downstream linkages, aimed at promoting value addition; aid upstream linkages to develop capital goods, consumables, and the service industry; and enhance supporting infrastructure. Most importantly with the latter, he noted that power was of utmost importance and was a key requirement to drive industries such as mining.

He also stressed that significant investment in technology is critical to this development agenda and that aggressive investment in exploration will help unlock the vast mineral resources which are unexposed. Last, but by no means least, the President suggested that conflict and instability continue to hamper mining growth and the economic development the industry could support.

“We must endeavour to foster peace and stability as conflict impedes investment and endangers our ability to deliver economic growth for our people. Therefore, I want to underscore Zambia’s efforts to resolve ongoing conflict on the continent. Instability anywhere is a threat to stability everywhere.”

Hichilema partnered this noble pursuit by reflecting on his country’s determination to reduce corruption and build partnerships which will develop not only his country but its neighbours as well, as only together can Africa’s narrative change and its future prosperity be ensured.

Concluding, Hichilema shared his vision of a “new dawn” for Zambia’s mining sector. His government is determined to revive the Zambian economy which is anchored by mining and has continued to be a major contributor to the country’s development.

“We believe in its potential to be a great contributor to our economy. We welcome pragmatic collaboration with the mining industry and other players and are committed to building a resilient and sustainable mining industry. Zambia is open for business.”

The renewed confidence that Hichilema is hoping to foster in his country’s mining sector has already been demonstrated by a new US$1.35bn package of new projects. This week, Quantum Minerals approved plants to invest US$1.25bn in its expansion of Kansanshi’s operations in Solwezi and a final US$100mn to starts its Enterprise nickel project in Kalumbila. These represent the largest investment in the country since FQM’s Sentinel project which was approved in 2012, and is another step in the government’s goal of increased copper production to 3mn tonnes a year within the next decade.