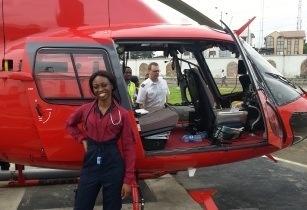 While the idea of flying doctors and air ambulances in East Africa is almost taken for granted, in West Africa the concept has only just taken off thanks to the work of the African Medical and Research Foundation (AMREF) and Dr Ola Orekunrin, who Stephen Williams met with recently to find out more about her life in the air

While her air ambulance business, Flying Doctors Nigeria, has been a great success, there is real sadness in Dr Ola Orekunrin's story of how her initiative took off. When her younger sister fell ill in one of the remoter parts of Nigeria, her family tried to find an air ambulance to evacuate her for hospitalisation.

"Then we were able to find a company in South Africa that could evacuate her, but by the time we had actually made all the arrangements to do that, she was dead. She was just 12 years old and that made me start thinking about what sort of path my life should take and how impactful I could be with the skills I have."

It was for her, perhaps, an easy decision, except her parents threw up some initial objections.

"I've always loved medicine and I've always loved flying," Orekunrin told African Review. "But when I first started to think about choosing a career, my parents were adamant that I shouldn't learn to fly as they were very afraid of crashes and thought planes were very unsafe. So I decided, initially, to study medicine."

This was something of a departure for her family as nobody had ever before elected to become a doctor before and, as Orekunrin explained, while her mother was not completely thrilled by her career choice, at least she was not flying.

Shortly after completing her medical studies in the UK, she decided to move back to Nigeria and start a paediatric air ambulance service to, in some way, meet the challenge of bad roads and huge distances.

"There was no way that sick people could move around in Nigeria or in fact the whole West African sub region," she said. But inaugurating an air ambulance service had its own challenges.

"When I arrived in Nigeria, I decided to start an air ambulance, not just a specialist pediatric air ambulance, that would cover Nigeria and West Africa. It took a huge amount of work to get started with a lot of mistakes and a lot of completely dead ends."

Persistence and dogged determination paid off, however, and today Orekunrin's company is well-established.

"We have a mixed-pool of more than 20 aircraft that we use for different types of evacuation, and about 30 staff all employed in different capacities with us and branches in three major cities in Nigeria," she said.

The result is that hundreds of lives have been saved – not just in Nigeria, but across the region.

Half in jest, I asked Orekunrin if she owned an oil well or two, as air operations take up so much capital.

"No I don't," she replied with a laugh, "but I work for a lot of people who do own them, a lot of oil and gas and mining companies, and a lot of industrial firms who sign up to insurance schemes for emergency evacuation services.

"A lot of people somehow assume that as its Africa, it has to be a charity and that there's not enough money to pay for these things. But, actually, when I started pitching and trying to sell and explain the role of these services, people embraced the idea as there was nothing else like it," she said.

Marketing her emergency air ambulance services does not take up all her time. Medicine is still a passion, and she specialises in trauma evacuation cases, sometimes travelling along with the patient as they are transferred to intensive care facilities.

"I do a few transfers myself. I try and do the long distance ones – repatriations to India, to the UK and to South Africa when there are critically ill patients," she said. "As I have already said, sick people can't move around in Nigeria and we have about a hundred cases of trauma every day in the country.

"We would probably need around 100 aircraft to take them all to hospital. So, we have started looking at other things that we can do, such as looking at land ambulances and boat ambulances to solve this problem, because right now if you have an accident in a remote region or on a Nigerian motorway, you are almost certainly dead. There's just absolutely nothing – no mechanism, no emergency response system – that can serve sick or injured patients.

"So, with the Nigerian national army, we have started a paramedics training college that will first train 10,000 paramedics over the next five years; hopefully that will be another step in the direction of making sure that Nigerian patients, and patients throughout West Africa, can get to an appropriate medical facility within the right time frame."

Dr Orekunrin has also pursued her flying ambitions and trained to become a licensed helicopter pilot.

"It was a bit scary as there are so many moving parts and I think my learning was a bit slower than the average pilot," she remarked. "It's really, really interesting when you are learning skills outside your prime discipline. I mean medicine came to me very easily. I took flying as a challenge and I've flown several times now."

Helicopters have a crucial role in first response medical responses as, clearly, you do not need a landing strip – although their range is fairly limited – and that's where Dr Orekunrin's fixed-wing fleet comes in, although there remain the various challenges that often found in Nigeria.

"Jets cannot serve much of Nigeria as only certain airports have long tarmacs," she explained. "Actually, most of the airstrips in the country require you to get the cows off the runway before you can land! And we need sea-planes for the Niger Delta region and helicopters for offshore evacuations – we need a mixed fleet of aircraft."

On the question of whether the Nigeria Flying Doctors' air ambulance's success has created competitor companies coming into the medical air evacuation services industry, Dr Orekunrin noted that there were a few other companies, "but we take pride in being the first Nigerian indigenous company to do this". She also believes that she has been instrumental in ensuring that Nigerian citizens have a better chance of surviving accidents and medical emergencies.

"We are training more people to go into the air ambulance sector and I think our paramedics now have a huge amount of management skills. I just think that we need to start thinking outside the box and be more confident in the concept of African innovation," she stated.

"In many cases, the cost of the latest in medical equipment is not viable for Africa – such as a modern ventilating machine – can cost hundreds of thousands of dollars. But there are alternatives being developed in the world that accomplish nearly everything that a Western ventilator does, yet costs just a few hundred dollars. We have to stop this habit of trying to aspire to whatever is in the West, a copy and paste model that doesn't fit into our situation in Africa.

"We have to start thinking what sorts of devices, what sorts of technology, what sorts of gadgets we can invent ourselves, and these technologies can generate a whole new industry that we can take to the world," Dr Orekunrin added.

It is evident that Dr Orekunrin, like most doctors, wants to do the very best for people that need her help and by doing what she does is helping her meet this aspiration.